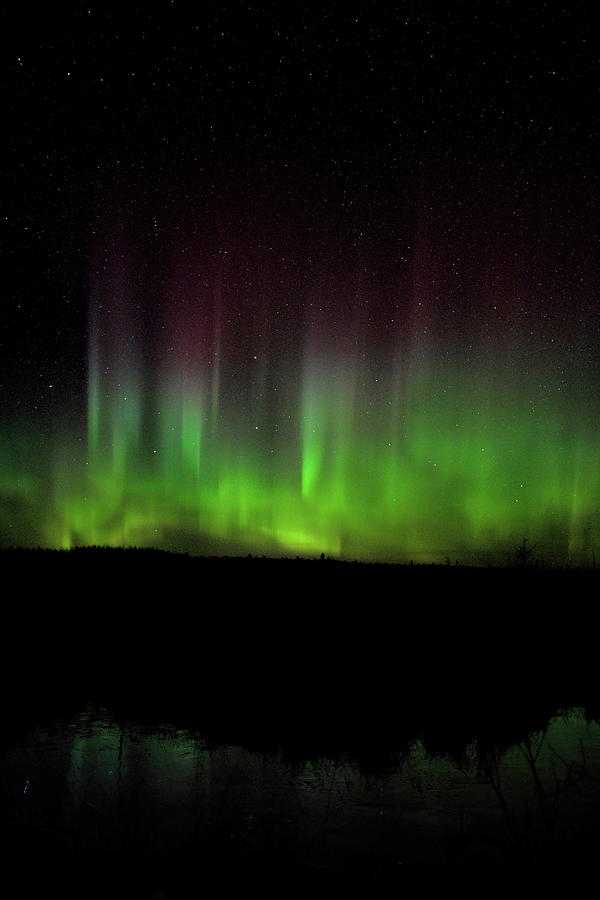 Line of Aurora Pillars by Dale Kauzlaric -- The data was indicating the aurora borealis or northern lights had a chance of appearing, so I went out northeast to the Ackley Wildlife Area located near Antigo, in Langlade County, Wisconsin. I tried to find a spot with a unobstructed north view. This was a new area I had not been to before, but I found a spot I liked. Here a channel was froze over already, but it would give me my reflection. As I was getting set up, the intensity of the glow grew. The aurora intensified quickly. The show included waves and pillars of light. Here is a capture of a line of pillars, moving from right to left.

The aurora borealis or northern lights is a colored light display that is visible in the night sky, usually only around the earth’s poles. It occurs when charged particles are emitted from the Sun and ride the solar wind. The particles can be emitted by coronal mass ejection or solar flares. Only particles directed in earth’s direction can be seen in the aurora. These particles are drawn by earth's magnetic field to both polar regions. Hundreds of miles up, they collide with gas molecules and atoms, causing them to emit light. The color of the northern lights is dependent on the type of molecules or atoms, the particles collide with. Generally, the aurora is green, but it can also be red, purple or a very rare blue and in varying shades of those colors. The aurora can be seen as just a glow or as waves or pillars, depending on its intensity. The aurora has to be fairly intense to be seen in Wisconsin’s latitude. There are several factors that have to come together, in order for the aurora to be visible at our latitude and not just at the north pole. The aurora is fairly common in the arctic, but not in Wisconsin. The other big variable is you need clear skies, not clouds. To find your best chance to see the aurora, you must get away from the city lights; to somewhere where you have dark skies. Your eyes can take up to 10 minutes or more to adjust to the darkness, to see your best. Human eyes cannot see the colors that the camera sensor can gather. However, we can usually see the tints of color in the lights and this will depend on the intensity. Some people can see the colors better than others, too. No two auroras are the same and that is what is so special about this phenomenon. Good luck in your aurora hunting, but watch out, it can be addicting! --
dalekphotography.com